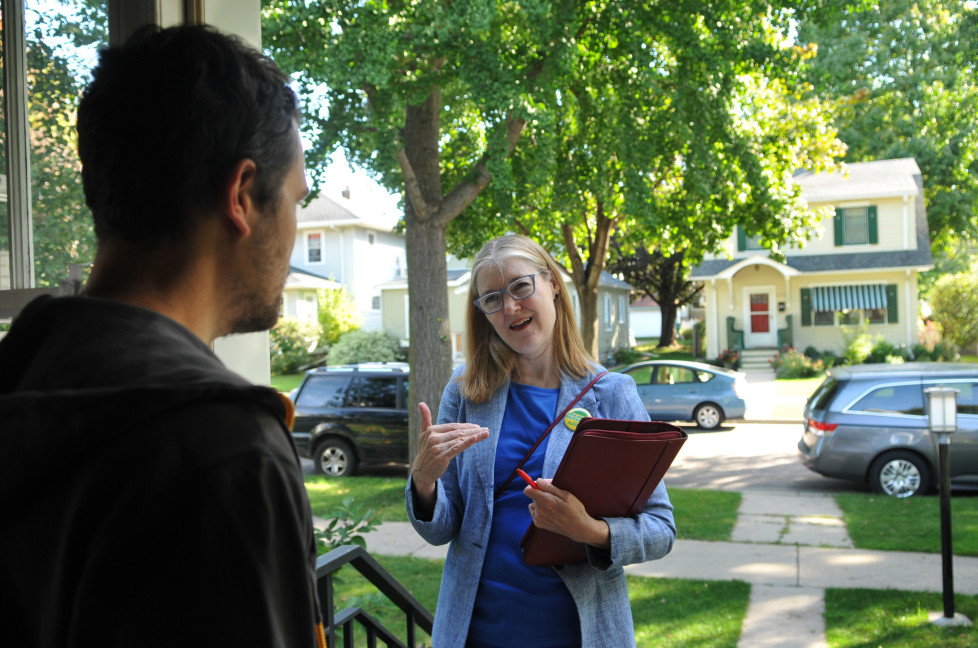 For the past 10 months, she’s toured the city promoting the gradual implementation of a $15 minimum wage that would apply to all businesses, large and small, without exception.

She also touts a wider variety of college-level training for police officers and law enforcement students. And, she’s proposing to convert corners of St. Paul’s East Side into hubs for manufacturing jobs in renewable energy.

And Dickinson wants to see solar panels on every school building, maintained in part by voluntary energy subscriptions from city residents.

“Wind and solar are renewable forever,” she said over coffee recently at Grumpy Steve’s Coffee House by the Wabasha Street Caves. “I think we could position ourselves as the energy capital of the Midwest. I’ve talked with (St. Paul-based) All Energy Solar, and they can’t find enough electricians to install their panels. They’re offering signing bonuses.”

Some call her a long shot — she’s raised about $20,000 in campaign cash, or 5 percent of what other leading candidates have amassed. But even supposed front runners privately acknowledge that the vagaries of ranked-choice voting could produce surprises when the final votes are tallied. The depth of Dickinson’s appeal is tough to gauge.

On Nov. 7, St. Paul residents will be able to choose up to six mayoral candidates in order of preference, so even voters who don’t list her first on the ballot may still end up casting a vote her way. 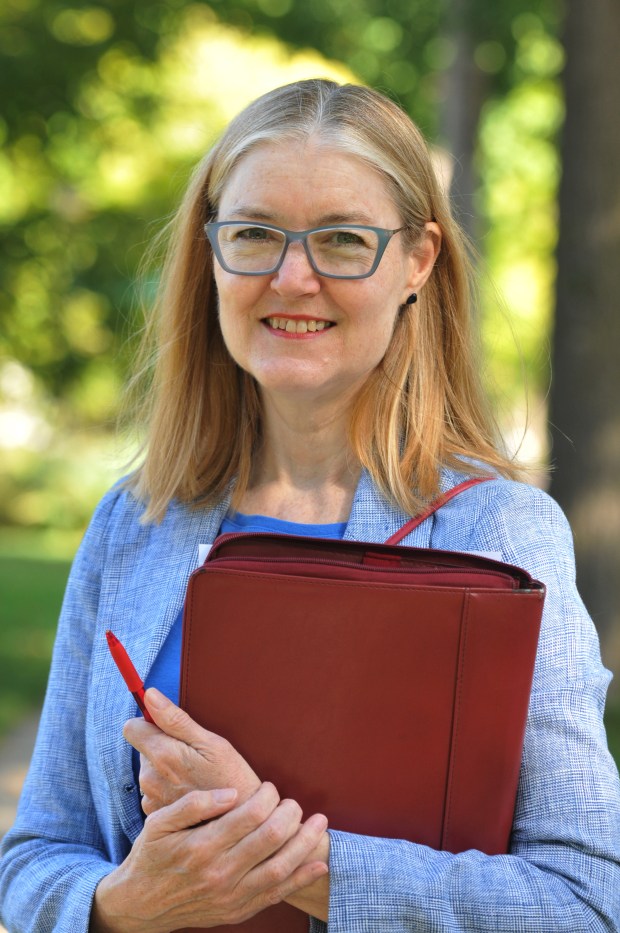 In full view of lawn signs for competing candidates, she’s knocked on doors and proudly asked voters to rank her as their second choice. With a chuckle, she recalls at least one resident informing her they had no background on the mayoral race and had no idea what their own lawn sign was about. There’s an uncertainty in the air this election season, and Dickinson is part of it.

“I think people want to get beyond polarization — Republican, Democrat, Communist, capitalist, white, black,” she said. “Having a two-party system, the way it’s entrenched, I’m not sure it always helps the public good.”

Small-business owners have questioned whether they’ll be able to afford nearly doubling the current state minimum wage to $15, though Dickinson points out she’s advocating for a gradual phase-in equivalent to raising wages roughly 75 cents per year.

“They’ll say if we’re hiring a 15-year-old kid, and this is their first job, they’re not worth $15 per hour,” Dickinson said. “But we’re also talking about single women with kids. Maybe they only hire one 15-year-old instead of three. I really think that someday we’ll see this as so basic, like the 40-hour work week, and like having child-labor laws.”

Dan McElroy, president and CEO of the Minnesota Restaurant Association, points out that restaurants forced to raise wages will raise food prices to compensate, and then eliminate tipping to keep their customers.

As a result, servers accustomed to earning $30 an hour after tips may see their income cut in half. In that light, prominent voices such as former Minneapolis Mayor R.T. Rybak and the “Pathway to $15” coalition, composed of restaurant owners and servers, have asked for exemptions for tipped employees. But Dickinson is firmly opposed.

Instead, she wants to explore other forms of savings, such as using increased payroll taxes to offset healthcare costs for small businesses.

“If you listen emphatically, nonjudgmentally, after a while, they’ll say ‘yeah, we can work with it,’ ” she said.

“In our divisive world today, we need people who will work to bring people together to solve problems, and I see her leadership style as someone who will do that, as opposed to her just assuming she has all the answers to the problems,” Goodman said. “(Dickinson understands) if we want to change the culture of policing, we need to get more women in policing.”

Upon meeting her, few voters might realize Dickinson comes from immigrant roots. Her mother, who is British, worked as a meteorologist during World War II before joining her father, a factory technician, in a historic New England mill town outside Lowell, Mass.

Dickinson worked as a substitute teacher, obtained a master’s degree in psychology and opened a private practice in Massachusetts.

She met her husband, Christopher Childs, on stage when they were both auditioning for the role of husband and wife. She and Childs, a national spokesman for Green Peace, moved to the Twin Cities in 1998, in part to take advantage of the better health insurance benefits for performers.

That same year, Childs published “The Spirit’s Terrain: Creativity, Activism, and Transformation,” which urges activists to embrace meditation and optimistic outlooks, rather than negativity and melodrama.

Among her credits, Dickinson wrote and starred in a one-woman show at the popular Twin Cities Fringe Festival based on the life of the 19th century poet Emily Dickinson. The show was named “Best of the Fringe” for three years running. 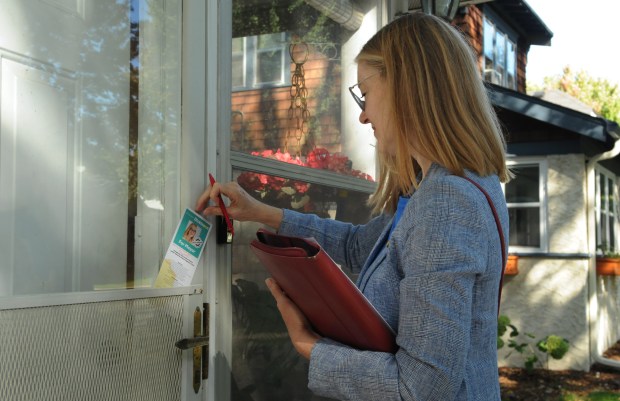 Has Dickinson ever held elected office? The answer is no, but she has walked the halls of the Minnesota State Capitol in an effort to sway votes.

As a lobbyist, she represented the Minnesota AIDS Project and Healthy Legacy, an organization that advocated for removing toxic chemicals from consumer products. Dickinson also represented the National Parent Teacher Association as it advocated for “Common Core” academic standards in English and math. She co-founded Clean Energy Now, a coalition that successfully pressured Xcel Energy to shift its St. Paul High Bridge and Minneapolis Riverside power plants from coal-burning to natural gas.

“You don’t have a coal-burning power plant in St. Paul because of Elizabeth,” said Justin Eibenholzl, a fellow co-founder of Clean Energy Now. “So you can all breathe a little easier — we all can in the entire seven-county metro.”

In 2003, Chris Coleman chose to run for mayor rather than seek re-election to the Ward 2 City Council seat representing downtown and surrounding neighborhoods, and Dickinson saw her chance.

A couple years of service on the board of the West Side Community Organization and the backing of the Green Party helped prop up her campaign.

Since 2011, she’s made a career of one-on-one personal coaching, helping individuals map out career and life goals, as well as presentations to the corporate sector.

Dickinson acknowledges she’s never had to cast a difficult vote on a city budget, but she says she’s done her homework.

To bone up on police training, she’s met with the St. Paul Police Chief, completed ride-alongs with two female police officers, and interviewed international policing experts. She sees herself as less threatening to the St. Paul Police Federation than Carter, who has called for specific reforms in police training, and less firmly aligned than Harris, whom they’ve endorsed.

“I’ve been on some of the local college websites to examine the curriculum of criminal justice and law enforcement programs,” Dickinson said. “Not all of these feeder colleges are teaching the kinds of skills the public says it wants the police to have: implicit/explicit bias training, de-escalation training, community policing and engagement skills to the same degree.”

The city’s Right Track summer internship program draws applications from some 1,200 youth for 500 jobs. In her view, it needs to expand.