Welcome to the February 2016 issue of the Sunflower Seed! In this issue you will find details and locations for the GPMN Caucuses, a recap of our winter membership meeting, local and national Greens in the news, as well as exciting new opportunities for growing our Party! Enjoy!

On March 1st from 7-9pm you will have the opportunity to vote on resolutions, straw poll for presidential candidates, obtain news on other candidates seeking Green Party endorsement in 2016 and meet Greens from your area!

The confirmed locations are as follows:

If you are interested in proposing a new Green Party of MN Party Resolution or Platform Proposal (to be decided on at the Summer Membership meeting) you can find the forms on our website here or you can fill them out at your nearby caucus on March 1st.

If you also would like to know more about the 2016 Green Party Presidential candidates prior to caucus night, feel free to read about them here.

Hope to see you out Caucus night March 1st from 7-9pm! Invite your friends on Facebook, click here! 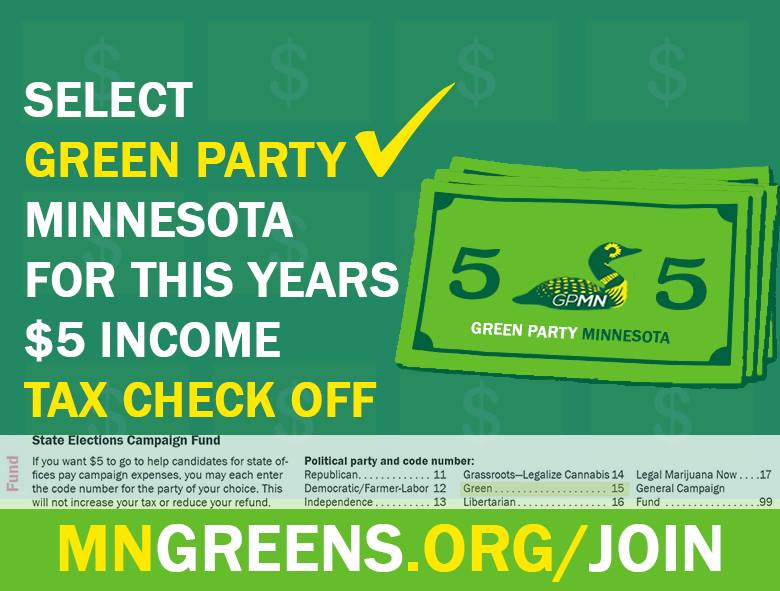 It's tax season! Don't let it get you down, you can now make the Green Party of Minnesota stronger!

Make sure you check off code number 15 under the State Elections Campaign Fund! (tax forms here)

Your contribution will help us run principled, non-corporate, progressive candidates for state government! 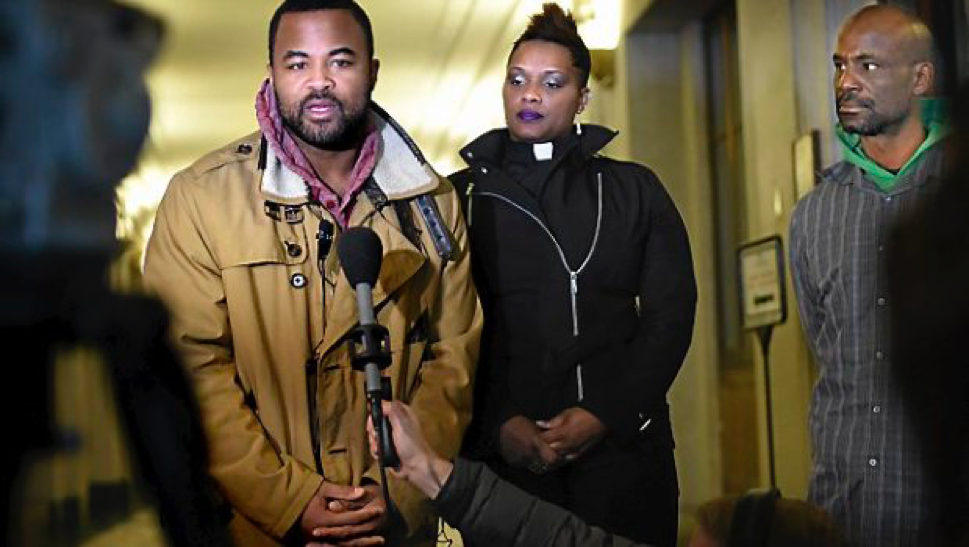 Rothecker admitted to authoring a post on social media that encouraged people to “Run them over,” referring to a protest organized by Black Lives Matter that took place on the Marshall Ave.-Lake St. bridge in St. Paul and Minneapolis on January 18, 2016, Martin Luther King, Jr. Day. In his post, Rothecker also provided instructions as to how a person could avoid being charged with a crime if the person hit one of the protesters while driving a vehicle.

Rothecker has been placed on paid administrative leave while an internal investigation takes place. Turner, Crews, and other leaders from the Black Lives Matter movement are calling for swifter action. Even the editorial board of the Star Tribune agrees. Crews also advocated for filing criminal charges against Rothecker. 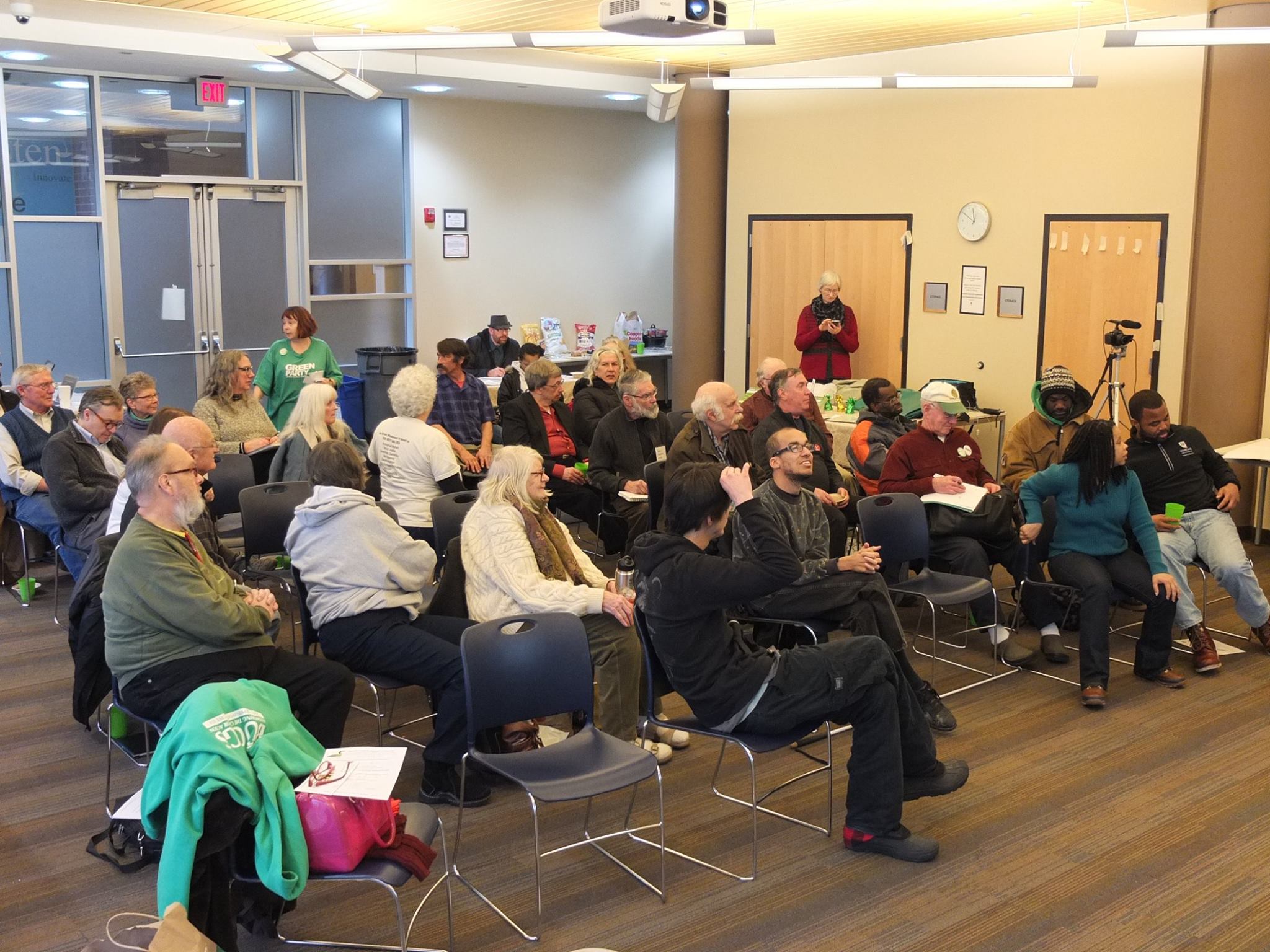 This year’s Green Party winter membership meeting in Saint Paul was a great success, with a big turn out and awesome workshops!

We would like to thank our workshop leaders – Kip Hedges from 15 Now Minnesota who spoke about local efforts to bring living wages to the Twin Cities, Bob Tammen who spoke on the dangers of sulfide mining, and Mark Haase with the 2nd Chance Coalition who spoke on restoring felony voting rights.

Thank you to all of our members who became new sustaining donors at our membership meeting! Your monthly contribution makes it possible for us to support progressive, non-corporate candidates and grow our Party!

If you are not already a sustaining member you can become one today by clicking here! 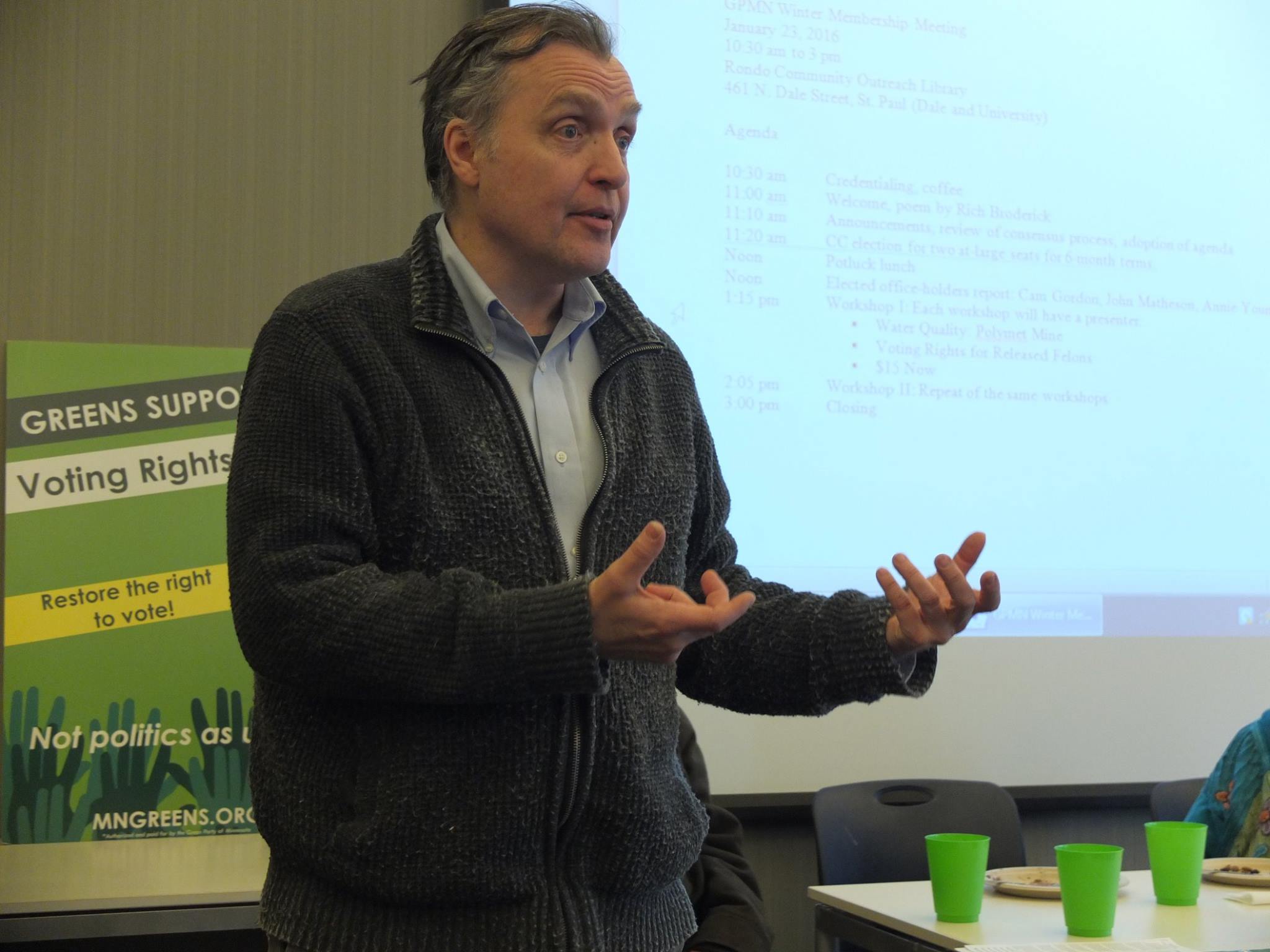 The changes allow food trucks to operate at farmer's markets and other events without requiring a permit in addition to the normal food truck permit. More food trucks will be allowed at events, the requirement for a minimum number of operating days has been removed, and the parking rules clarified.

The City Council will vote on the proposal in February. Support for local small businesses and making Minneapolis a tastier place are on the menu for this summer thanks to Cam Gordon! 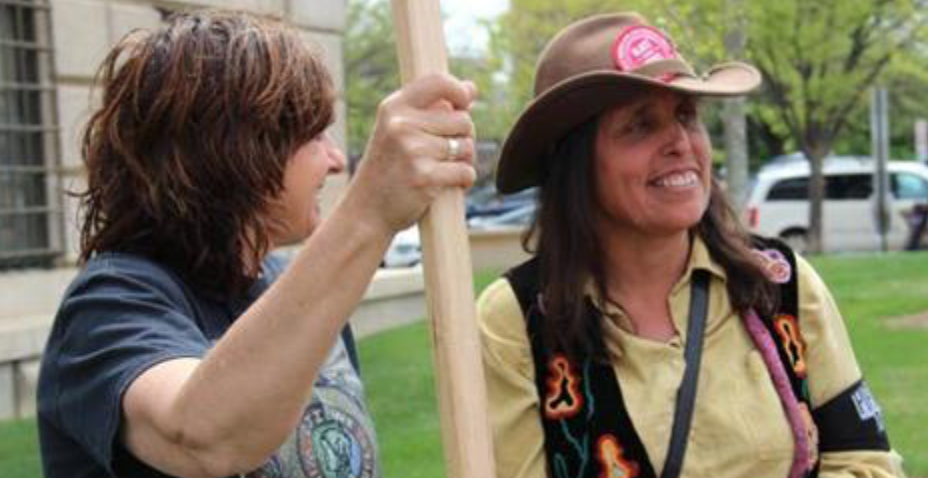 Longtime Minnesota activist Winona LaDuke is gearing up to run for White Earth tribal chairwoman at the next opportunity.

LaDuke, the executive director of the Native American environmental group Honor the Earth, was Ralph Nader’s Green Party vice presidential candidate in 1996 and 2000. 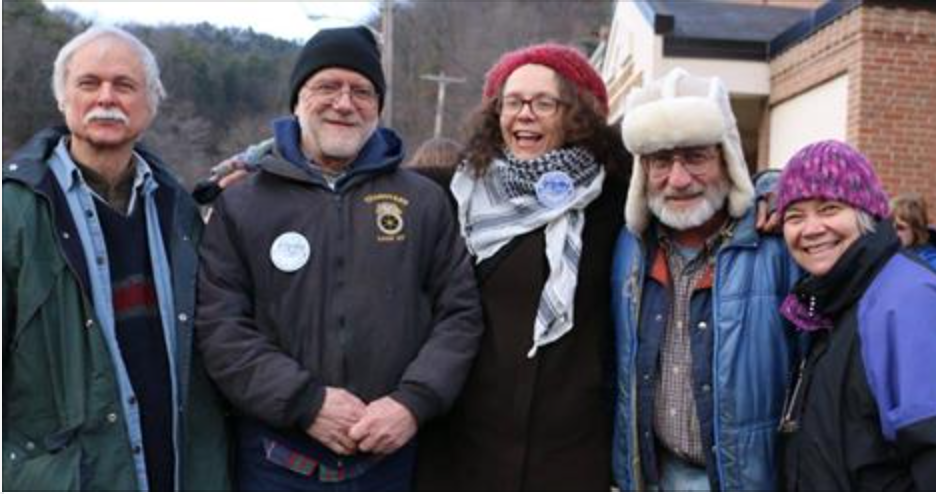 Howie Hawkins, who received 180,000 votes as the 2014 Green Party candidate for Governor of New York, was arrested on January 26th for protesting the construction of a hydrocarbon storage facility. The planned facility would store pressurized, explosive, by-products of fracking in a crumbling salt mine on the shore of Seneca Lake, one of the Finger Lakes in Western New York State. This threatened lake is famous for its natural beauty, tourism and winemaking industries, as well as providing the drinking water for 100,000 people.

His arrest was part of an ongoing campaign of civil-disobedience organized by 'We are Seneca Lake' (http://www.wearesenecalake.com/). Howie was released soon after the arrest, and there is no word yet if there will be charges against him. He has expressed solidarity with the #montrose9 who are currently on trial in Upstate New York for blocking the construction of a pipeline linking to the planned facility on Seneca Lake. 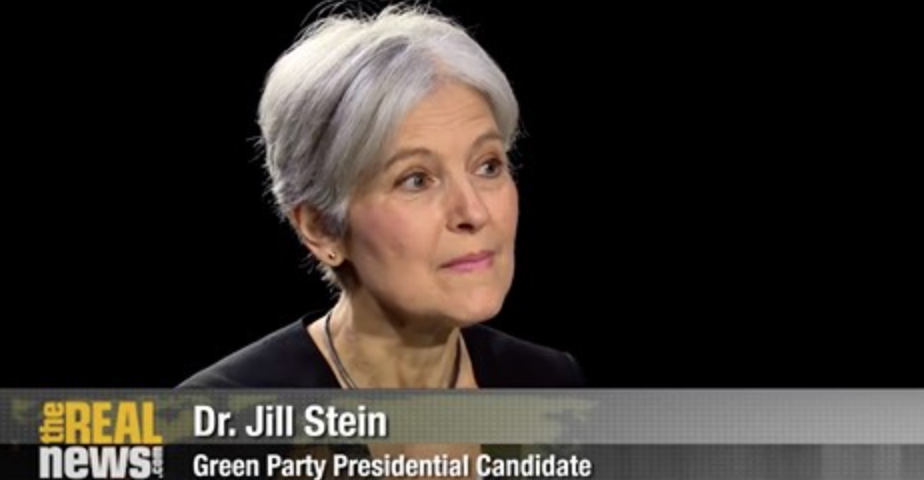 Presidential candidate Dr. Jill Stein & senate candidate Dr. Margaret Flowers were invited to speak on The Real News about the state of our current healthcare system and explain why the Affordable Care Act is not even close to the Single Payer system our country needs:

"The United States is the only industrialized country that uses a market based healthcare system, that treats healthcare as a commodity.

So many people, especially on the progressive side, have been told for the last 6 years that (the Affordable Care Act) was the solution, that we have national healthcare." -Margaret Flowers

"The Affordable Care Act essentially creates another level of bureaucracy and complexity and allowed the insurance companies to have a captured market to mandate that people buy these stripped down and expensive policies." -Jill Stein 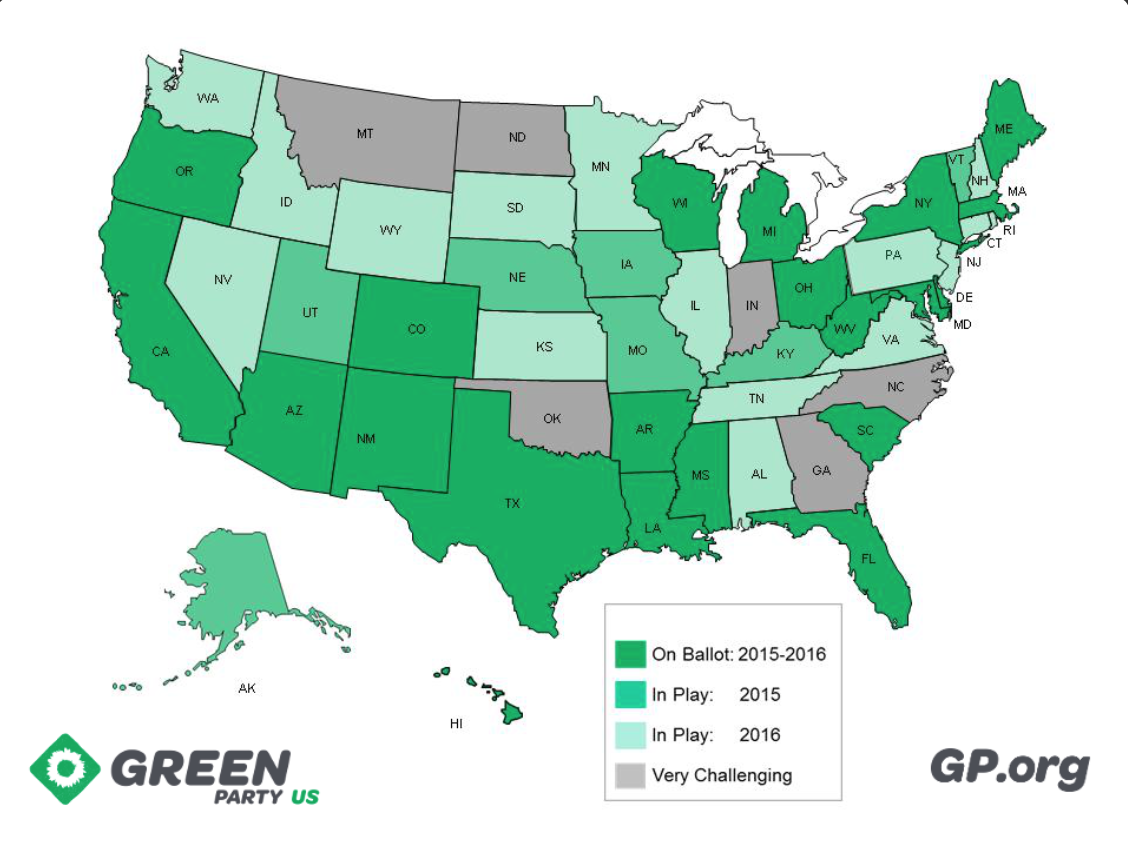 The U.S. Green Party is further ahead on ballot access in this Presidential election cycle than last!

Currently the national party has ballot access in 22 States, this time in 2011 there were only 17.