Welcome to the March 2016 issue of the Sunflower Seed! In this issue you will find out how to become a sustaining donor, a recap of our Green Party Caucuses, news on local Green activism, as well as great upcoming events! Enjoy! 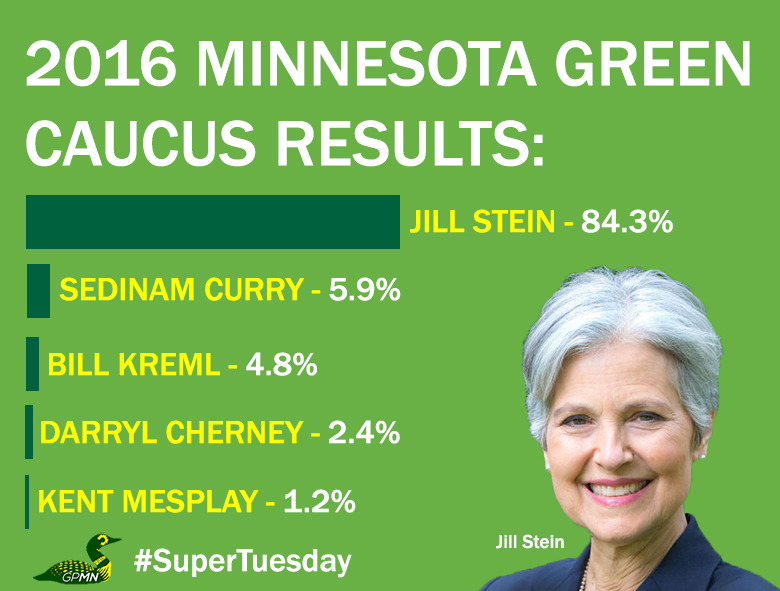 With 100% of Minnesota Green Party Caucuses reporting Dr. Jill Stein has won our Presidential Straw Poll with 84% of the vote.

While these votes do not determine Minnesota's delegates to the Green Party U.S. nominating convention, they are a great indication of member support for our recognized candidates. The official Green Party Minnesota delegate vote will take place in June at the Statewide Membership Meeting in St. Cloud (exact date and location to be determined).

"We are very excited to see the enthusiastic response for our candidates seeking the Green endorsement for President. As we are seeing with the two major parties, the public is clearly desperate for candidates they view as "outside" the political establishment. We share in the frustrations everyday Minnesotan's have with corporately owned politics and we are here for them as a principled alternative to that." -Brandon Long, Green Party of Minnesota Spokesperson

Along with a great turn out and in-depth conversations, Green Party leaders were interviewed about our caucus by major news networks Kare 11, PBS, and Fox 21.

Green members initiated a meeting with Rep. John Lesch to discuss accountability on the $5 billion-plus expenditure each year of our Minnesota taxes for the needs of government-subsidized patients. This meeting was followed by a District 66 Town hall meeting, where Greens from that district voiced their concerns about health care policy. Rep. Lesch became aware of the problems caused by the HMO and DHS situation and pledged to introduce a bill in the Legislature to rectify the situation. It is anticipated to be ready in March.

There is also a petition drive to promote Senator Marty's bill to conduct a cost/benefit analysis of single-payer health care versus the HMO system currently in place.

You can also contact Green Diane Peterson at [email protected] if you are interested in joining the petition presentation event. 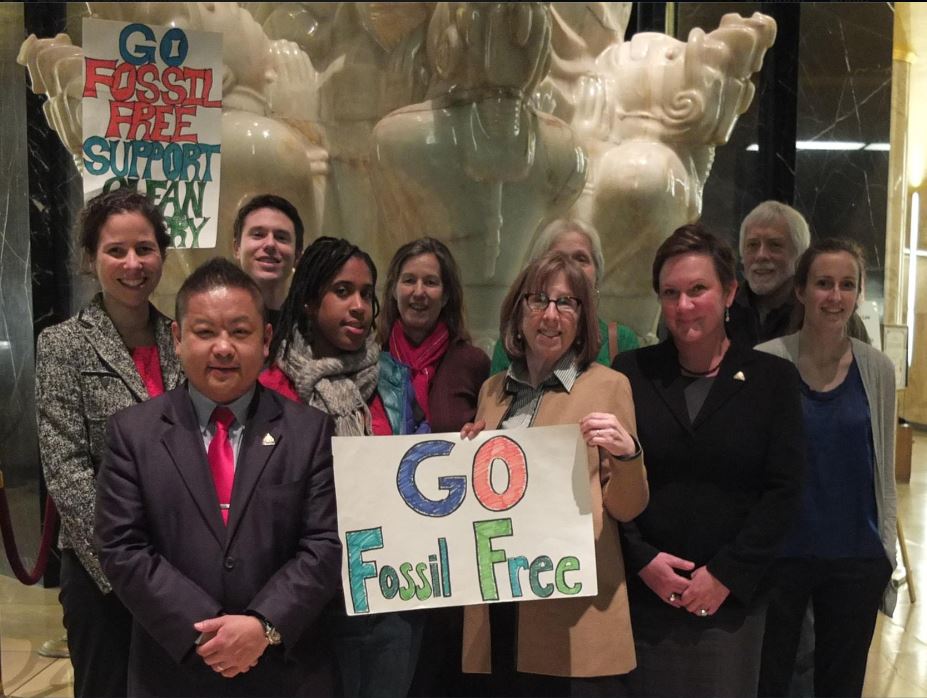 Saint Paul joins its twin city Minneapolis and dozens of cities, counties, and even countries who have vowed to divest or never invest in fossil fuel companies!

GPMN Party Spokesperson, Brandon Long, who helped organize the effort over the past year, had this to say about the resolutions unanimous passage:

"We are very pleased that our capital city has joined this movement, declaring that divestment from fossil fuels is the moral choice to fight the devastating effects of climate change.

We hope that the passage of this resolution will inspire Councilmembers to continue to push for serious and urgent climate action and do all in their power to ensure that the City of Saint Paul meets the challenge of becoming a truly sustainable city while using its influence to inspire institutions within the city and beyond to divest any of their financial holdings in fossil fuels." 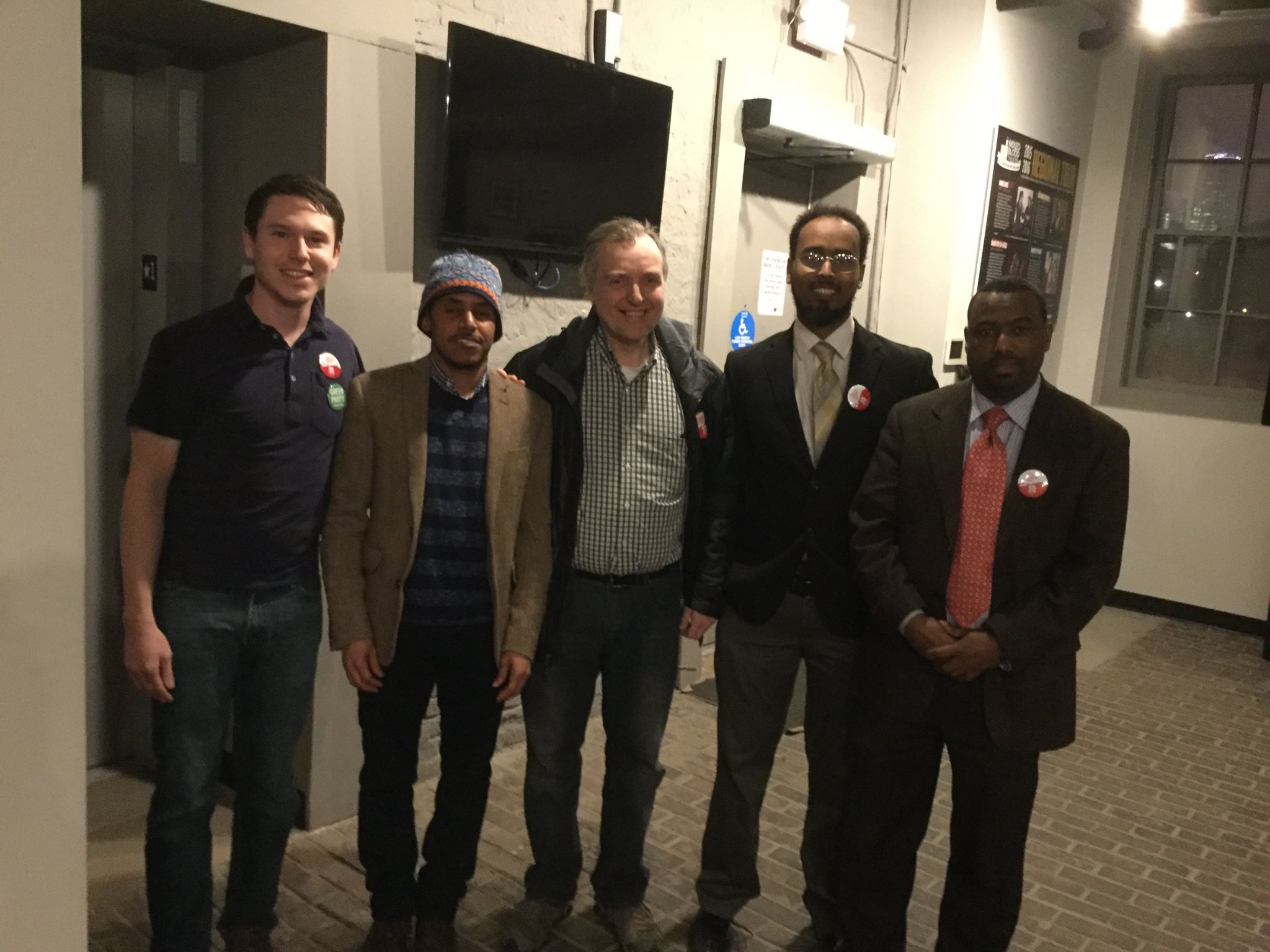 Greens were proud to hear the continued support for a $15 living wage in Minneapolis from our Green elected official, city councilmember Cam Gordon, at an event highlighting issues within the Oromo community in Minnesota. The event, organized by GPMN CC Member Hassan Hassan last month, brought together several organizations working on Oromo community issues.

In addition to learning more from the Oromo community, the Green Party of Minnesota was invited to speak about our Green values of Grassroots Democracy, Non-Violence, Social/Economic Justice, and Ecological Wisdom and rejection of special interest money, which was warmly received.

We would like to thank the Oromo community members who welcomed us to discuss issues facing their community. 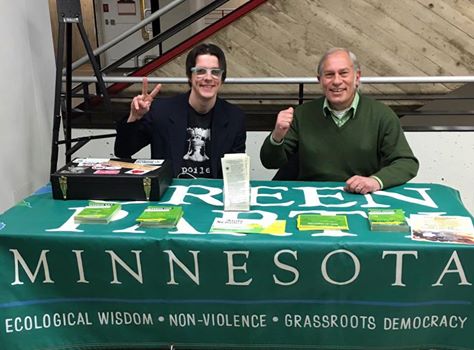 Issues of ballot access, proportional representation, and media exclusion were hot topics which present significant problems regarding fairness and choice in our electoral system.

While the major parties try to make ballot and media access harder, alternative parties are banding together and fighting back! 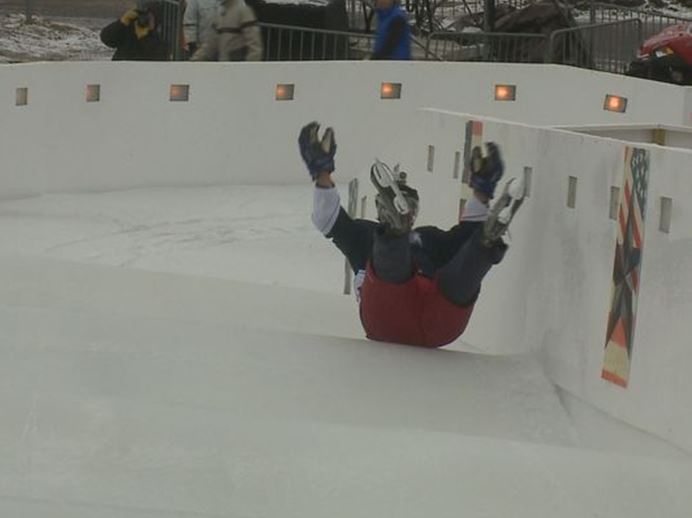 Black Lives Matter (BLM) Saint Paul organized #BlackIce, a demonstration that was set to take place at the Red Bull-sponsored Crashed Ice event in Saint Paul on February 27. BLM Saint Paul leader and former Green Party Candidate Rashad Turner ultimately decided to cancel the protest prior to the event after an extended meeting with Mayor Chris Coleman and other state and city officials.

Black Lives Matter released a statement indicating that the group’s demands had been “sincerely addressed” by city leadership. The demands included terminating Jeff Rothecker, the Saint Paul police officer who encouraged motorists to run over protestors during a Martin Luther King, Jr. Day march, and auditing the Minnesota grand jury process. Rashad Turner also recently appeared on TPT’s Almanac to talk about the advances BLM made with the proposed demonstration.