Welcome to the November 2015 issue of the Sunflower Seed! In this issue we have exciting election night news with wins across the county and world, Green activism across the state, and important updates on upcoming events! Enjoy!

Thank You Green Party of Minnesota Endorsed Candidates - And Voters! 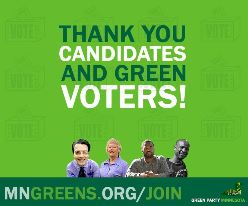 The Green Party had four endorsed candidates running in municipal races this past Tuesday, in St. Paul, Duluth, and Golden Valley. While none of the four candidates won elected office, nearly 5,000 votes were cast for a Green Party candidate on Tuesday night.

In St. Paul, where Greens ran Trahern Crews for City Council, Ward One, and Rashad Turner as a write-in candidate for School Board, the vote totals did not reflect the impact Greens had this election cycle. Both candidates are leaders in the Black Lives Matter movement in St. Paul, and both drew national attention for their races. Crews and Turner are committed to continuing to organize in the community, and with the Green Party, appearing upbeat on the national Green Party of the United States LiveStream coverage of the elections.

Kriss Osbakken also ran a very visible campaign in Duluth, appearing at rallies with organized workers, environmentalists, and supporters of Ranked Choice Voting, which Democratic Party leaders worked hard to defeat in the final weeks of the campaign. Osbakken, too, vowed to continue building the Green Party in Duluth and the 8th Congressional District, a region of Minnesota with a rich radical history.

Running with Green endorsement, as well as endorsements from the Ecology Democracy Party and Legal Marijuana Now, Andy Schuler ran a spirited campaign in Golden Valley. As a first time candidate, Schuler spoke to numerous Golden Valley residents one-on-one, and his passion for participating in the democratic process shone through. We look forward to Andy running again in the future – and winning!

Green Candidates Win Across The Country 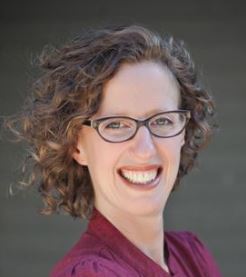 Green Party candidates were elected to dozens of local offices around the country on Tuesday night, including 10 of 12 Green candidates running in California! One highlight is the election of former Green Party of the United States steering committee member Marnie Glickman winning election to the Dixie School Board in Marin County, CA. Full results of 2015 Green Party elections are available at www.gp.org.

Democrats Use Fear Mongering to Scare Votes Away from Duluth RCV 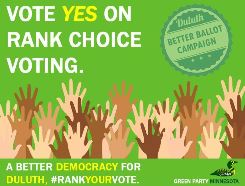 We are disappointed with such high profile Democratic Party officials as outgoing Mayor Don Ness, City Councilmember’s, and even former Vice President Walter Mondale, for the fear mongering which denied Duluthians much needed election reform.

The Green Party of Minnesota is proud to have helped collect signatures to put Rank Choice Voting on the ballot. We would like to thank all the Greens who supported this ballot initiative as well as Fair Vote Minnesota for their hard work. We are hopeful that the City of Duluth will reconsider democracy reform in the future and that Minnesotan’s statewide will be given real choices at the polls with important electoral reforms.

You can read more by clicking here 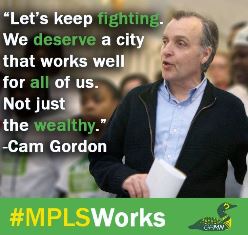 We are proud of our Green City Councilmember Cam Gordon for voting with the minority which stood by workers in Minneapolis this fall.

Cam was one of three councilmember’s to defend the proposed Fair Scheduling and Paid Sick Leave ordinances, which have been taken off the table (former) and postponed (latter) by 10 Democrat Councilmember’s and Democrat Mayor Betsy Hodges.

#‎MplsWorks advocates in attendance called for new leadership in 2017.

The Green Party of Minnesota fully supports the Working Families Agenda and we will be prepared to provide real progressive options in the coming elections. Read more here.

The Green Party of Minnesota was happy to endorse the #StopEnbridge action in Duluth November 2nd.

If allowed to move forward, the Enbridge expansion would steal land from our Native sisters and brothers to increase the flow of Tar Sands oil, described as the dirtiest fuel on the planet, from Canada through Minnesota putting our precious water ways at great risk (i.e. Kalamazoo River).

Six activists refused to leave the Enbridge office and were promptly arrested for their actions. We commend these activists for their brave act and all those individuals and organizations that participated. It is start to treat climate change like the emergency it is.

Elizabeth May Re-Elected to Canadian Parliament

Green Party of Canada leader Elizabeth May was re-elected to parliament last month in national elections which saw a new Prime Minister elected. May, who has been named “Parliamentarian of the Year,” “Hardest-working MP” and “Best Orator” by her colleagues, was not able to lead the party to additional seats, but like lone UK Green-MP Caroline Lucas, was safely returned to office in her Ottawa district.