Duluth played host to a great Green Party of Minnesota Membership Meeting last month. This issue of the Sunflower Seed recaps that meeting, as well as the successful petitioning Greens engaged in on behalf of the Duluth Better Ballot Campaign. Green volunteers teamed with local activists to help put the campaign over the top on the number of signatures it needed to put Ranked Choice Voting on the ballot in Duluth this fall!

There are just a few short days left to make a fully refundable donation of up to $50 to the Green Party of Minnesota! Donate by June 30th, and you will receive a receipt to submit to the State of Minnesota for the Political Contribution Refund Program. To donate, go to: https://mngreens.nationbuilder.com/donate

Greens from Minneapolis and the 5th Congressional District will have a booth for both days of the festival. Contact Cam Gordon at camgordon333@msn.com if you would like to volunteer!

We need volunteers to help spread the Green message! If you are interested in volunteering for a shift, please contact Andy Hamerlinck at iamandy@riseup.net or 651-402-7328. 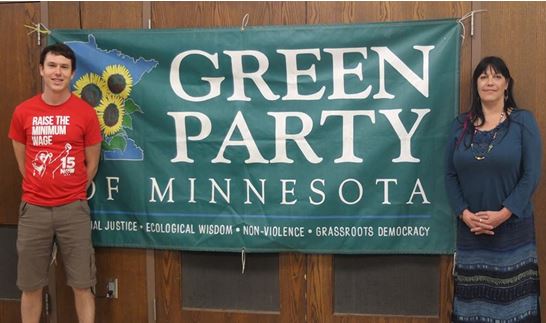 It was a beautiful Saturday in Duluth when the Green Party of Minnesota convened at the First United Methodist Church on June 13 for its biannual Bylaws meeting. About 35 people were in attendance.

At the meeting, Reyna Crow and Brandon Long were elected to the Green Party of Minnesota Coordinating Committee. Reyna lives in Duluth. She is a community activist involved in a wide range of issues, including protecting wolves and advocating for survivors of violence. Brandon lives in St. Paul. He has been very active in local and state Green Parties, recently helping to revive the Sunflower Seed newsletter and building the Green Party of Minnesota’s presence on social media.

A.J. Janssen of Cottage Grove was reelected as a representative to the Green Party of the United States. Joining him is Luke Sharman of Duluth, Steve Linnerooth of Center City, and Matt Hollinshead of St. Paul.

Greens also unanimously passed a change to the Bylaws making the section on membership requirements clearer and more reader-friendly. The change will soon be viewable online at mngreens.org under the Bylaws section.

After a delicious potluck lunch, Greens split up into groups and brainstormed ideas for the state party strategic planning process. The topics of conversation included communications, fundraising, and locals. The dialogues produced great ideas, goals, and even some action items, complete with people volunteering to follow through on the actions. 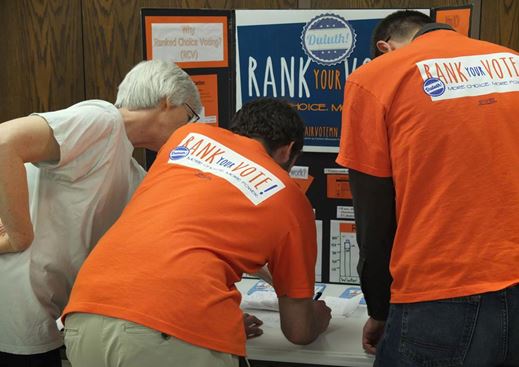 Greens were excited to be joined by Casey Krolczyk and Henry Helgen from the Duluth Better Ballot Campaign. Following the meeting, many energized Greens joined the campaign in an action to support Ranked Choice Voting. Knocking on doors in a neighborhood near the meeting site, Greens took advantage of the beautiful weather to collect signatures to help put ranked-choice voting on the November 2015 ballot in Duluth. 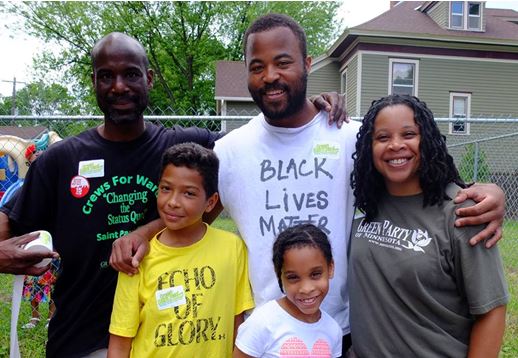 Attendees also got to enjoy live performances by various artists from around the Twin Cities and other family-friendly activities. It was great to be surrounded by people who not only have a better vision for our youth in St. Paul and Minnesota, but are working together to make it a reality. And they are having fun doing it! 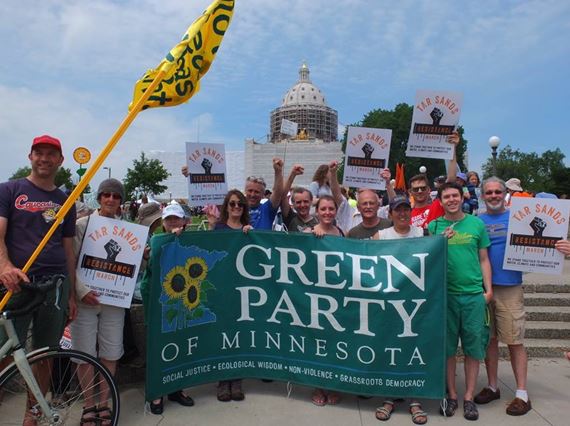 Many Greens Turn Out for Pipeline Protest in St. Paul

Greens were out in force during the largest Anti Tar Sands Rally the Midwest has ever seen. 5,000 people marched through downtown Saint Paul to resist the expansion of pipelines carrying dirty crude oil from Canada - like the Sandpiper pipeline which the Minnesota Public Utilities Committee recently approved. Former Green Party Vice Presidential candidate Winona LaDuke shared the stage on the steps of the capital with 350.org's Bill Mckibben and Sierra Club's Aaron Mair to let Minnesotans know that the Midwest is ground zero for the fight against tar sands and climate change. Green Minneapolis City Councilmember Cam Gordon was among the many Greens marching against Tar Sands-

"If we are to stop the pipelines they have planned we will need more. We need to educate, organize and strategize for it's not going to be easy. But today we saw we are not alone. That felt good." -Cam Gordon 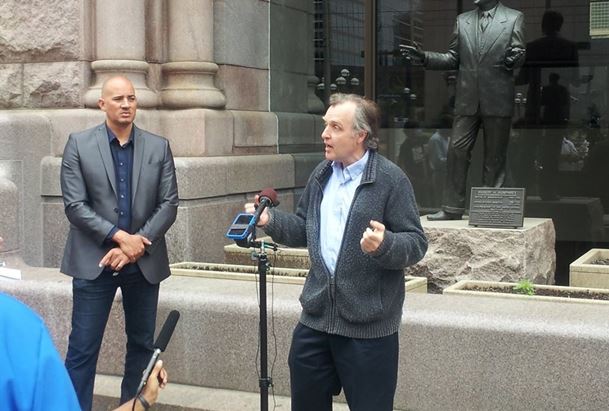 A big thank you to Green Councilmember Cam Gordon for coauthoring, and successfully passing, a repeal of the Minneapolis spitting and lurking laws which were dubbed #MinneapolisBlackCodes for their racially discriminating nature. From Councilmember Gordon-

"The Minneapolis City Council voted 12-1 this morning to repeal the ordinances against spitting and "lurking." This is an important step towards a more just and equitable city, and I'm proud to have been part of it.

I will continue to work on these issues of racial disparities in our criminal justice and other systems. We have built a society in which we continue to see inequitable outcomes on every measure of success between whites and people of color. Changing that is one of the most critical challenges we all face, and we must face it together." 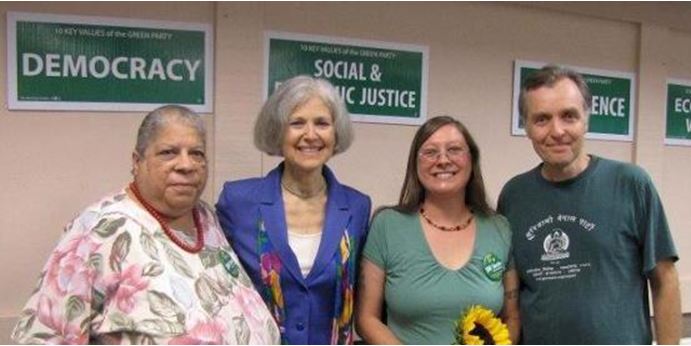 First Term Crystal City Councilmember Laura Libby – a proud Green – is the sole progressive voice on an otherwise Republican Council. As such, Laura is defending the city of Crystal against the short sighted managing of tax payer funds that is all too commonly practiced by the two major parties.

A recent letter to the editor from a Crystal citizen in the Sun Post singled out Libby’s all-too-often singular struggle to bring good government practices to the Minneapolis Suburb: http://post.mnsun.com/2015/06/letter-shortsightedness-mismanagement-or-what/

On Friday, June 12, Greens from 16 countries across Asia and the Pacific met for a rare and historic gathering in New Zealand. The Asia Pacific Greens Federation congress focused on climate change and its impacts in the region. Greens from Australia to India and across the region were there to discuss Green politics and issues. Here is a write-up from the New Zealand Herald, including interesting news on the explosive growth of the Green Party Korea:

As always, please send us any feedback on what you’d like to see in future issues of the Green Party Sunflower Seed! We can be reached at info@mngreens.org.