Welcome to the June/July 2017 issue of the Sunflower Seed! In this issue you will find updates on our 2017 Green campaigns, hear about a giant success in Minneapolis, meet a potential Green statewide candidate for 2018, find out how you can join GPMN in supporting a new Black-led Credit Union and other ways you can get involved! Enjoy!

The Minnesota State Fair is less than a week away, and the Green Party of Minnesota needs your help to ensure we continue our long tradition of Green Politics at the fair!

As of this sending of this newsletter, we still need volunteers to fill the shifts below. Volunteers get a ticket into the fair for each day you volunteer. It's easy, fun, and a great way to help support and grow the Greens! 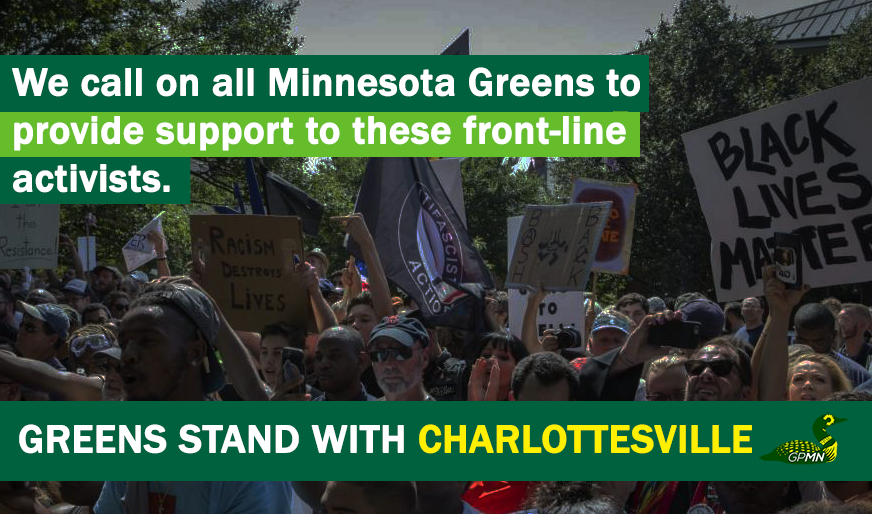 We condemn the racist violence that has taken place in Charlottesville, VA, which has left one anti-racist activist dead, and many more injured.

The refusal by President Trump to condemn these acts of terror in clear, undeniable terms is deplorable. His refusal to call out the violent actions of white supremacists speaks volumes about where he stands. Violence and terrorism perpetrated by organized white supremacists is not a new phenomenon.

Its history is sadly interwoven with that of America since before our country's founding. Those in communities most often on the receiving end of this violence need not be reminded of this fact.

The Green Party of Minnesota stands with all those on the front lines in Charlottesville, VA, who are bravely resisting racism and violence.

"We call on all Minnesota Greens to provide support to these front-line activists, and to stand with all those across Minnesota working to combat racism and white supremacy in our own communities," said Party Chair Brandon Long. 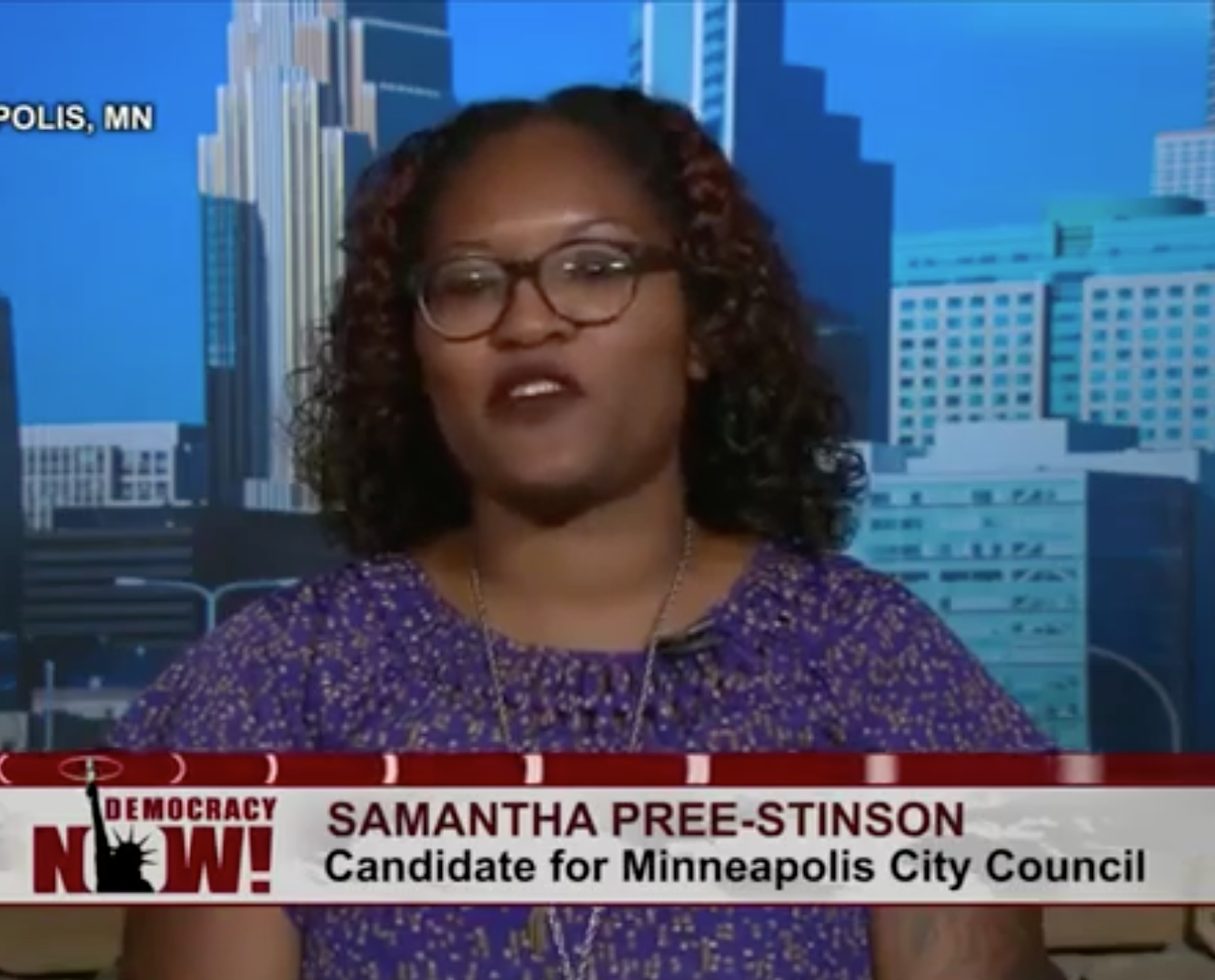 This summer has been a tumultuous one in Minneapolis, with the verdict in the Philando Castile shooting, and the resignation of the Minneapolis Chief of Police, Janee Harteau. Minneapolis Green Samantha Pree-Stinson, who is running for City Council in the city's Ward 3, has been an active participant and speaker at countless protests and rallies around issues of police violence.

Because of her outspokenness and leadership on these issues, Pree-Stinson has appeared in the national media twice this summer to discuss these issues.

On July 24, Pree-Stinson appeared on Democracy Now! to discuss the resignation of Chief Harteau. You can view her appearance here:

Four days later, she appeared to discuss the same issue on RT America, footage of which can be viewed here:

In addition to being a powerful speaker, campaigner and leader in her community, Samantha Pree-Stinson was also elected this summer to the Green Party of Minnesota Coordinating Committee. To find out more about her campaign, visit http://preefor3.ruck.us/ 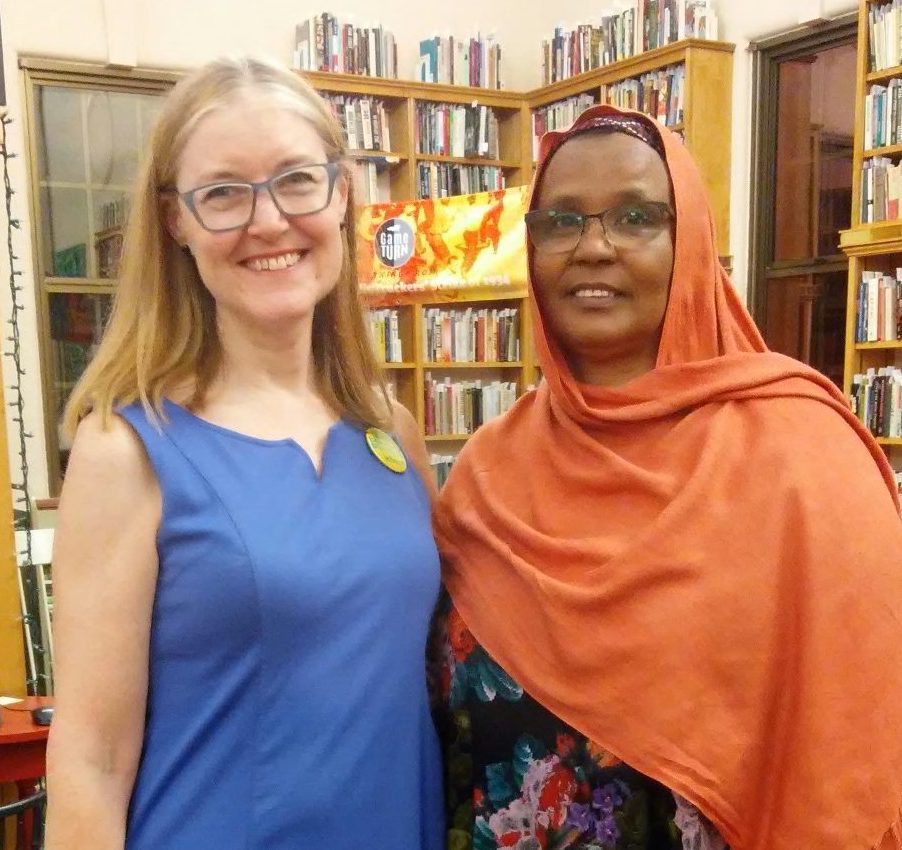 Green Saint Paul Mayoral candidate Elizabeth Dickinson has kept up a steady and brisk pace with her campaigning this summer. While door knocking, she estimates that she has had over 600 face-to-face conversations with St. Paul citizens since mid-April, and her volunteers have had about 400-500 more. This also means that Elizabeth and campaign volunteers have door knocked and lit dropped thousands more doors!

Her campaign has been out in every ward. Over 80% of those people have strongly supported her focus on environment and energy policy, and an overwhelming majority have supported a $15 minimum wage!  Only 2-7% have already chosen a favorite candidate, but most are happy to consider a second or third choice! Given the lack of a DFL endorsement and St. Paul's adoption of ranked choice voting, this is the perfect year for Elizabeth to run!

In addition to campaigning, Elizabeth has attended many meetings in the community, including all of the meetings on PILOT/SILOT since June. (Only one other candidate came to even one of them.) She has also attended a half dozen community meetings on policing, race relations or the Philando Castile verdict.

Elizabeth was also the only major candidate to attend the first organizing meeting for $15Now in St. Paul. She continues to do outreach to organizations, community leaders, and businesses. While Elizabeth's campaign seems to have been more active than her opponents' campaigns, there is a need for volunteers to step up now. All of the campaigns are gearing up as we approach the election, so we need more people donating their time and money to help get Elizabeth elected!

Please contact Paul Busch at [email protected] if you can pitch in in any way! You can also donate to the campaign here and help fund her lawn sign drive! 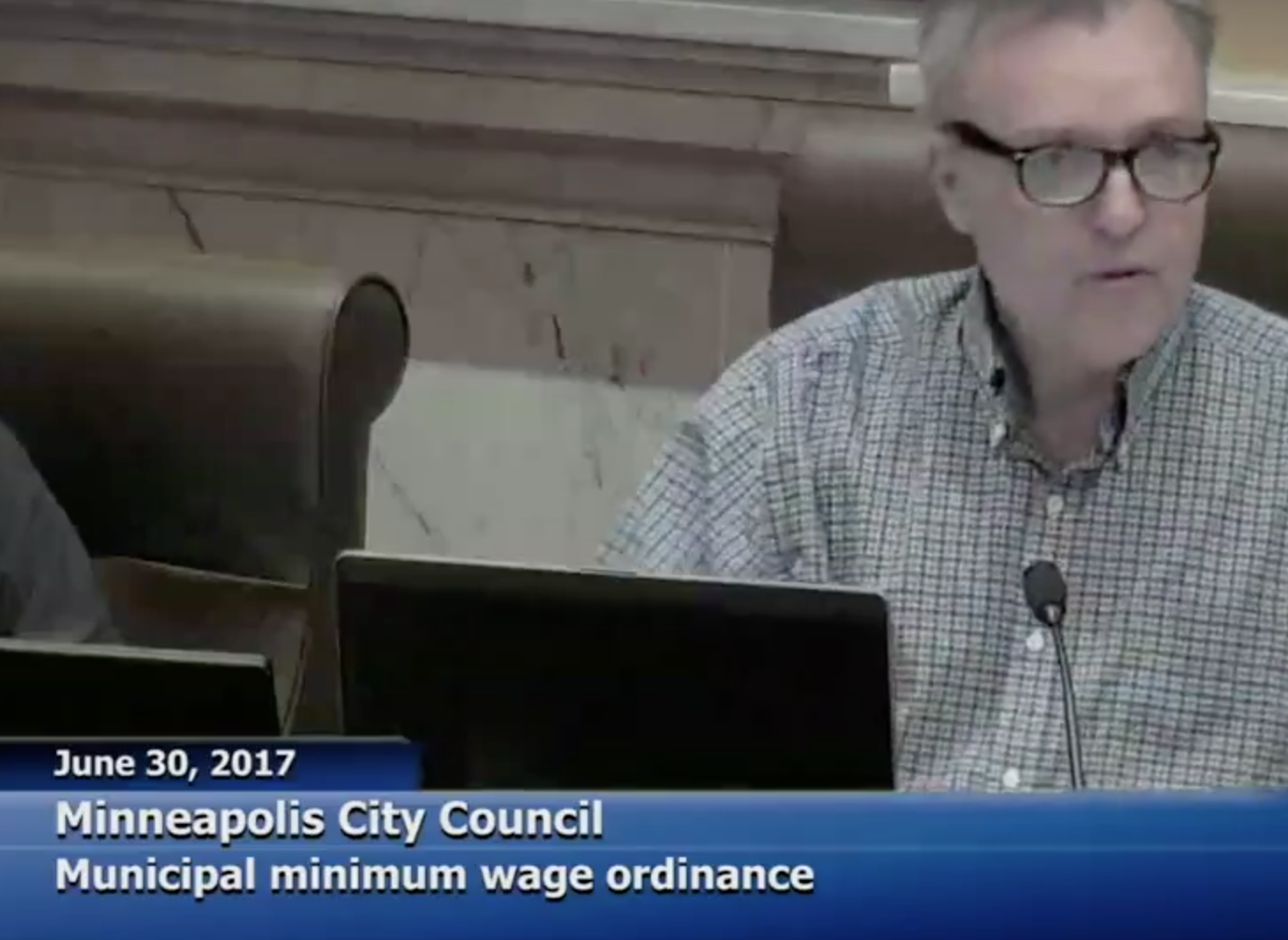 The two-year effort to raise the minimum wage in Minneapolis to $15 per hour ended in Minneapolis June 30 when the City Council passed an ordinance requiring large businesses to phase in the wage hike in five years, and businesses of fewer than 100 employees in seven years.

Councilmembers Cam Gordon spoke in favor of requiring large businesses to raise the wage in four years, by 2021, but the council majority supported the longer phase-in.

"I support it with some regret. I mean, there was definitely a sense that there's urgency here," Gordon said, as reported in the StarTribune. "We need to start raising the wages of our lowest paid workers so that they can participate more fully in the economy."

Gordon has spoken strongly for a $15 minimum wage throughout the effort to enact the raise, led by the community group $15Now. Last year, when $15Now had collected more than 20,000 signatures on a petition to put a $15 minimum wage into the city charter, Gordon was one of only two votes on the council to allow the measure to go to the voters.  The strong showing from the petitioning of support for raising the wage, however, pushed the council to move on enacting an ordinance.

“This will not only bring more money into our local economy and allow more parents to provide food and shelter for themselves and their children, but it will also directly address historic racial economic inequities that are one of our city's most challenging and persistent problems,” said Gordon.

The ordinance does not include an exception for tipped workers, but applies to all who work within the city limits for any amount of time. Once the $15 minimum is reached, the ordinance calls for cost-of-living increases so new ordinances do not need to be enacted to keep the wage livable. 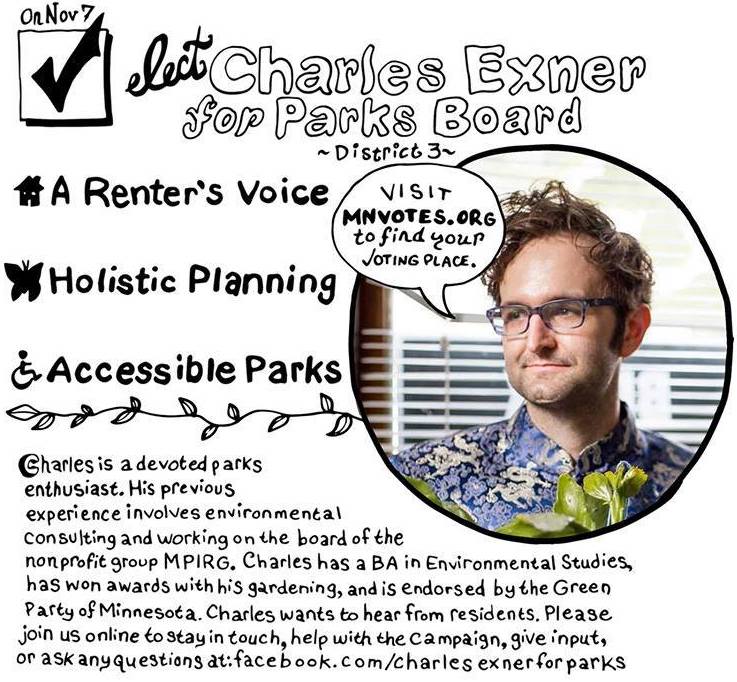 While the archived link is no longer available, Charles had this to say about his Park Board race on KFAI earlier this month:

"I'm running to provide a renters' voice on the Park Board. I feel that the people who need the parks the most are people in high density housing or renters who have no land of their own, we all deserve a little vitamin "N" - that's nature."

You can find more about Charles and help with his campaign here. 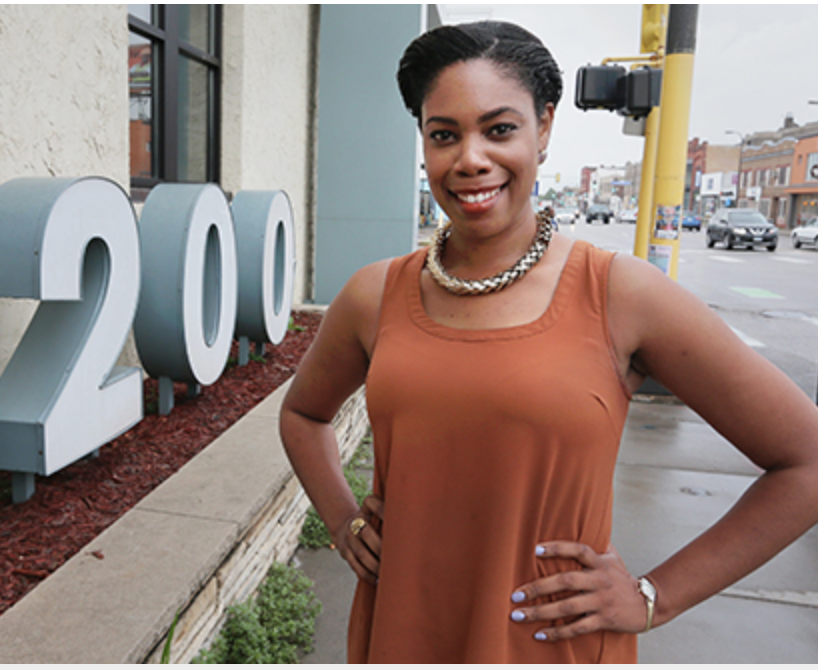 The last time one existed in Minnesota was just before the US Government and State of Minnesota destroyed the historic Black neighborhood of Rondo in Saint Paul by paving it over with I-94, the recent site of protests demanding justice in the killing of Philando Castile.

Excerpt from the TC Daily Planet:

While Minnesota has two Native-led credit unions, White Earth Reservation and Northern Eagle Federal Credit Union, with a total of 120 credit unions across the state, the dominance of white-owned financial institutions in the state looms large.

“When you don’t have foundational financial institutions at the roots of certain communities, it’s very difficult for them to become economically healthy and strong,” she explained.

To ABEP, the establishment of a credit union in North Minneapolis is a branch of activism and a means of community protection. While a bank is owned by shareholder and is a for profit institution, credit unions are owned by its members. [Full-Text Available]

Please join many other GPMN members in pledging to move funds. This is a critical show of viability as the credit union navigates the regulatory processes to become a credit union. 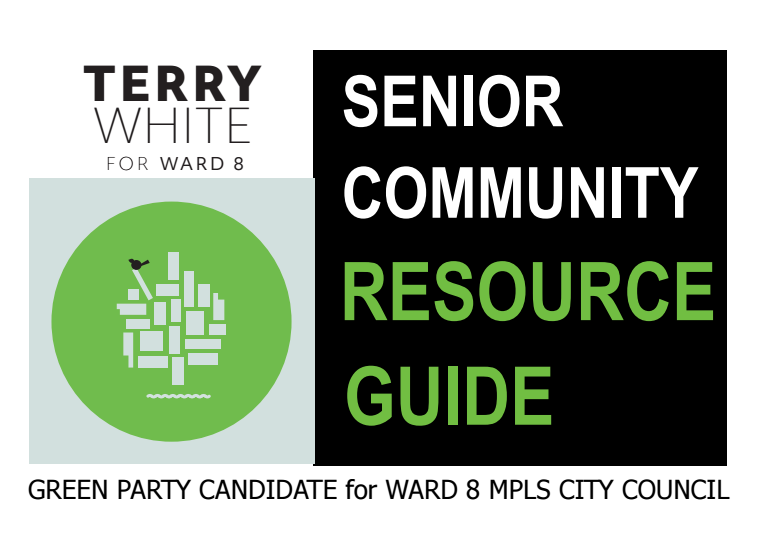 Green endorsed Terry White continues to publish robust and thoughtful resources and visions for the city of Minneapolis. From his campaign:

“Walking around town I hear a lot of people saying they have a difficult time navigating city and community services, especially seniors and their care givers.

To help them, my campaign has created a Senior Resource Guide. I think it reinforces my drive to have a more accessible, responsive city government.

It is a PDF file that can be printed out as a handy way to connect with city and community services.” 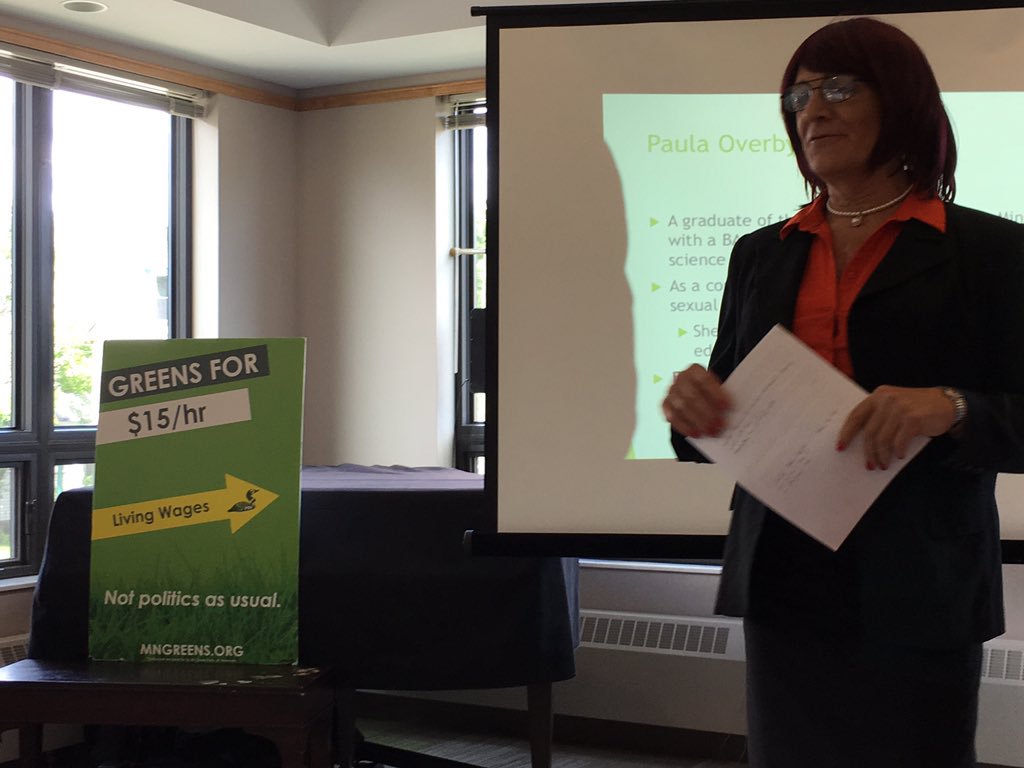 Paula Overby was the independent candidate for US House of Representatives in Minnesota’s 2nd Congressional District in 2014.

She ran again for the same office in 2016 gaining 8% of the vote, an unprecedented accomplishment for an independent candidate in the second district.

Paula is currently interested in representing the Green Party for a state wide campaign for US Senate in 2018.  This will create new opportunities and new challenges for the Green Party and she wants to hear from our membership about their thoughts and ideas.

The Green Party of Minnesota Coordinating Committee has recently formed a working group on PACs and Candidate Support. The purpose of this group is to examine issues around PACs (Political Action Committees), the party's stance on them, and how we can better communicate with and lend support to our endorsed candidates in regard to these issues.

If you would like to volunteer to be a part of this working group, please e-mail Andy Hamerlinck at [email protected].